All Books are signed, and you may specify during check-out the personalization you’d prefer.

Please note: Fulfilling an order in most cases is next day to 3 days max. On the occasion a book sells out before being restocked, it may be delayed until more stock arrives. This could take a couple of weeks. If you have any questions about your order, please email us at penelopedouglasauthor@hotmail.com. If you would like complimentary swag added to your package, please do not choose Media Mail shipping at checkout. The US postal service will not allow any items other than books to be shipped Media Mail. 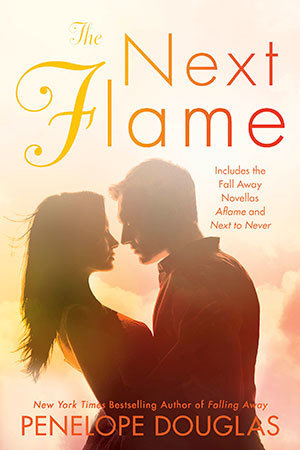 Under the close watch of the men in her family, Quinn Caruthers has found it nearly impossible to spread her wings—or even date—without her three older brothers, Jared, Madoc, and Jaxon, jumping in to hover. And when a family friend—several years older—from her childhood still holds her heart, she knows they’re going to be a problem. Lucas Morrow is a man, and knowing her brothers, he may as well be forbidden.


But years ago, Lucas left town and shows no signs of returning. Quinn knows she shouldn’t wait for him anymore.

Until a package turns up on her doorstep with no return address and its contents reveal family secrets that threaten to turn her world upside down. She’s never asked about the path of her parents’ romantic history, but she soon learns their happy marriage had a very rocky and passionate start.

As she starts to see things around her with new eyes, Quinn will have to make tough choices about whether she’ll keep waiting…or finally go after what she really wants.

» Add it to Goodreads

» Add it to Goodreads

Deleted Prologue from Next to Never

This prologue was deleted from Next to Never to shrink the word count in the paperback. If the paperback is too big (since it contains both Aflame and Next to Never) it would end up being too expensive for readers. This prologue still works and fits for the book, but it wasn’t crucially important to the story, so I’m offering it up now in its entirety for your enjoyment! Some of this has already been released to readers, but this is the whole thing. There will be a couple more deleted scenes coming after the release on January 17th!! Enjoy <3

I hear my mother’s voice coming from the office down the hall and pull my black sweatshirt over my head as I tiptoe undetected cross the hardwood floors.

“You’re twisting her into knots, Jason.”

“She’s fine,” my dad barks, and I hear papers shuffle. “You’re worrying for nothing. As usual.”

I’m careful to stay quiet as I stop next to the wall and inch closer to the office.

She. That means me, I assume.

A narrow strip of light spills through the crack in the door, and I peek in to see my father standing behind the desk, organizing his papers, while my mother stares at him from the other side.

It’s typical of my dad to avert his eyes in any confrontation with my mother. As if looking at her will make him fold.

“Jared and Tate rented a house in Huntington Beach for the summer,” she tells him. “I’m sending her with them.”

His gaze finally shoots up, and he glares at her. My heart starts pounding, because I know that look.

“Like hell you are,” he growls. “She’s thirteen years old! She’s not going away for an entire summer. Our daughter stays with us.”

“She needs a break!” Mom fights back. “She’s a straight A student, and you still have her seeing a Math tutor to get ahead. She’s in gymnastics, piano, the computer club, and she’s seeing a Spanish tutor three times a week in addition to the French she’s already taking at school. I want her to have the summer off.”

“Quinn likes to learn. She made those choices.”

“Because she loves you,” my mom says, “and she wants you to be proud of her.”

“I am proud of her,” he retorts, and I can see his chest starting to rise and fall faster as he plants his palms on the desk. “I’ve only ever wanted her to be happy. You know that.”

“Because there’s nothing wrong!” He pounds his fist on the solid wood of his desk, and I jump. “After all these years, you still don’t trust me. Our life is good now. Why can’t you let it be that way? You’re manufacturing these problems.”

My eyes sting, and I pull back, resting my shoulder against the wall. My parents are silent for a few moments, and then I hear my mother’s quiet voice, thick with tears.

“She doesn’t argue,” she tells him. “She doesn’t ever tell us what she wants. She just nods and agrees. ‘Sit still and do as you’re told.’ That’s Quinn.”

I lock my teeth together to keep my chin from trembling and stare down at my hands as I start to pick away at the pink nail polish on my thumb.

“I don’t think I’ve ever seen her cry,” my mom continues.

“Yes!” she bursts out. “I want to see her do something! Jared would yell, fight, break things, and I hated it, but at least I knew what I was getting was true. I knew what I had to work with. I can’t read Quinn.”

My toes curl into the floor as I run my thumb along the jagged piece of polish I’d peeled away.

My dad’s right. I’m fine. So I may not go out on big adventures like Hawke or tear up the track like my brothers. Maybe I don’t need to make a spectacle of myself or prove anything. Maybe I’m happier this way.

“Jared, Madoc, Jax…” my mom goes on, “they all raced over the edge, and they did it running. Quinn’s so afraid to even move a muscle.” She pauses, and I hear her inhale a breath, her voice turning resolute. “She’s going away for the summer, and that’s final—”

“…and maybe I should go with her!” my mother bites out.

I suddenly hear a crash.

My breath catches in my throat as I peer into the office again. I see my dad glaring at my mom, his teeth bared and his breathing heavy, while everything on the desk is now piled onto the floor in a messy heap. The chords in his forearms, visible since the sleeves of his white shirt are rolled up, are tight and his hands are balled into fists.

Tears well in my eyes. I’m never seen him so angry.

My mother’s back straightens. “Careful,” she says in a smooth voice, almost cocky. “You’re still so used to life revolving around your every command, maybe it would’ve been better keeping me as your whore.”

My breath shakes, and I blink to keep the stinging away from my eyes. Whore? What the hell does she mean by that?

My dad stares at her and slowly rises, standing up straight and looking furious. She went too far.

My mother twists around, and I tense, seeing her come my way, but she doesn’t make it. My dad rounds the desk, grabs her by the waist, and pulls her into him, her back against his chest.

She gasps, and he wraps his arms around her, holding her tight as he buries his face in her neck.

She closes her eyes, breaking down and quietly sobbing as she turns her face toward him.

I breathe hard, backing away and unsure what to do next. I’m so confused, and I don’t understand the conversation I just overheard.

Turning around, I stop and inhale a quick breath. A dark figure stands in front of me.

“Shhh.” Lucas holds a finger against his lips.

I stare through blurry eyes up into his, which are a blue I would recognize anywhere, except I can’t really see clearly in the dark hallway. He reaches out a finger, and I blink as he catches a tear hanging off my bottom lid.

I swallow the lump in my throat and follow my brothers’ friend down the hall, into the kitchen, and through the door leading into the basement.

“Where are we going?” I ask as he flips on the light.

He says it as if that explains everything. It kind of does, I guess.

Just like my dad had a skating ramp built for his stepdaughter back in the day, Madoc, my brother, had a custom kitchen built for me outside on the downstairs patio, right off the finished basement.

I was here a lot, and even though my parents had bought another house less than a mile down the road, this house—the one my brother grew up in—was still home-base. Parties, barbeques, holidays…everything important was held here. And since it’s Memorial Day weekend, my other two brothers are here with their families, as well. Even though their houses are only a few miles away.

And then they all have children, which means I’m an aunt to four boys and two girls who aren’t much younger than me.

Yeah. Even I still get confused.

And then there’s Lucas.

Lucas is twenty-five—twelve years older than me. Madoc mentored him as a little kid, since he grew up without a dad, so for all intents and purposes, he’s family. He was a part of the family long before I was born, and I’ve never known a time without him.

Sign up to best of business news, informed analysis and opinions on what matters to you.
Invalid email address
We promise not to spam you. You can unsubscribe at any time.
Thanks for subscribing! Please check your email for further instructions.