Since the Devil’s Night series will soon be undergoing a rebrand, we’ll open up orders on the originals. Feel free to order now to make sure you get the original covers, but please be patient . Allow 4-6 weeks delivery for orders including  Devil’s Night as stock can’t meet demand. We’ll ship as soon as we’re in stock and in the order that orders are placed.

Please note: All books are signed, and you may specify during check-out the personalization you’d prefer.

Fulfilling an order, in most cases, is 3 to 5 Bus. days. On the occasion a book sells out before being restocked, it may be delayed until more stock arrives. You may not receive a confirmation email, but tracking will be attached to Paypal, Currently the post office is having issues keeping up with shipping, so some items may arrive latter than they should. Unfortunately that can’t be helped in the current climate. If you have any questions about your order, please email us at penelopedouglasauthor@hotmail.com. If you would like complimentary swag added to your package, please do NOT choose Media Mail shipping at checkout. The US postal service will not allow any items other than books to be shipped Media Mail. If you choose any other shipping option, swag is automatically added free of charge. Swag is book/series specific and subject to availability. If we’re out of one specific item we do substitute it best we can. Some specific pieces may/will be limited runs that may only be available while supplies last, 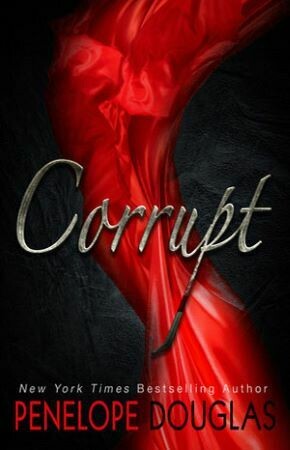 I was told that dreams were our heart’s desires. My nightmares, however, became my obsession.

His name is Michael Crist.

My boyfriend’s older brother is like that scary movie that you peek through your hand to watch. He is handsome, strong, and completely terrifying. The star of his college’s basketball team and now gone pro, he’s more concerned with the dirt on his shoe than me.

But I noticed him.

I saw him. I heard him. The things that he did, and the deeds that he hid…For years, I bit my nails, unable to look away.

Now, I’ve graduated high school and moved on to college, but I haven’t stopped watching Michael. He’s bad, and the dirt I’ve seen isn’t content to stay in my head anymore.

Because he’s finally noticed me.

Her name is Erika Fane, but everyone calls her Rika.

My brother’s girlfriend grew up hanging around my house and is always at our dinner table. She looks down when I enter a room and stills when I am close. I can always feel the fear rolling off of her, and while I haven’t had her body, I know that I have her mind. That’s all I really want anyway.

Until my brother leaves for the military, and I find Rika alone at college.

The opportunity is too good to be true as well as the timing. Because you see, three years ago she put a few of my high school friends in prison, and now they’re out.

We’ve waited. We’ve been patient. And now every last one of her nightmares will come true.

I could never run, and where would I go if I could?

Turning my hands palm up, I locked my knees together as I sat on the stone bench and stared down at the blood, darker where it had gathered in the creases of my skin. The gritty sands of dried pain were proof of what I’d done and what I could never deny.

That I wasn’t sorry.

I ground my thumbs over my fingertips, cocking my head and studying the red under my fingernails. The hair on my arms raised up and my skin tingled. An air of peace settled in my gut, and I sucked in a new breath, dropping my head back and closing my eyes.

No. I couldn’t run. They’d find me soon, and I wanted them to. I shouldn’t have run from them in the first place.

I pushed up, raising on shaky legs, the sharp edges of the wet leaves under my feet poking my toes as I walked toward the window of the garden shed.

The old, wooden shack was filled with bushels of roses that had been freshly cut only hours ago, their perfumed scent filling the musty air inside as the rain seeped through the dilapidated roof, soaking the cement floor under my feet. My jeans, wet from earlier, stuck to my skin as I peered outside into the late afternoon drizzle.

Tonight would be a long night.

The Crist family home in the distance, the only glow through the rain and cloud cover, stood as a threat and a punishment that I was putting off.

No one was coming for me. No one even knew I was here. I’d have to go back to the house.

Michael’s parents weren’t home this time of year, and there were no neighbors for miles. With forests to my left and right and cliffs at my back, cutting off to a dead end and a fatal fall into the Atlantic, the only way out was forward, through the house, and out the gates. Which were no doubt locked.

The guys were in the house—Michael, Mr. and Mrs. Crist’s eldest son, and his three friends—Kai Mori, Will Grayson, and Damon Torrance.

I curled my toes into the floor, knowing what was waiting for me. They’d been patient for years and continued to be so.

In high school, they’d called them the Four Horsemen. Star athletes, best friends, nothing touched them. They were invincible.

And one night I’d gotten close. Too close.

Damon was the one I feared the most.

He was blind action, like a machine with no weaknesses, and that’s why Michael kept him around. He could stomach anything.

Damion had made me cry. Once.

Then there was Will. He was unconditionally loyal to his friends and never questioned anything. There was a time I’d written him off, but he snuck up on me. I hadn’t known he was there until it was all over.

And Kai. I squeezed my fists tight and shivered in my wet tank top, the cold strings of my damp hair tickling my back.

Kai made me burn.

He wasn’t like Will. Kai’s loyalty lasted only so long as you deserved to keep it, and he was strong. So much stronger than me as we both well knew.

And then there was Michael.

They all built me in a way, but Michael began the foundation, laying brick after brick after brick and then tearing it all down to start over again. He lied to me, gave up on me, took from me, never believed me, and always—always—dug the knife deeper to chip away at me until I was nothing but bones.

And while the other three were at my back, never letting me escape, he was at my front, bearing down until I was shaking with fear.

Or high from it.

That’s what Michael had taught me. We can’t stop what happens to us, but we can choose how we survive it. Own it or it will own you.

I breathed hard, dropping my head as I tried to calm my suddenly racing heart.

“Michael,” I barely whispered, rubbing my chilled hands down my damp jeans. “What do I do?”

I hated his beautiful face and his hazel eyes—the color of cider with flecks of spice—and his hands…I hated his hands. They hurt.

I gritted my teeth, rubbing my forehead with the back of my bloody hand.

He wasn’t looking for me, because he knew I wasn’t running. The only running I’d ever done was toward him, not away from him.

I looked down, seeing the pointed tips of my breasts harden through the thin fabric, and I shook with silent, bitter laughter, reveling in my degradation.

I didn’t hate him. I simply wished I did.

Something crackled to my right, and I turned my head, sucking in a startled breath as a voice came over the speaker system on the wall.

“I feel irrational,” the voice sang, and I stopped breathing as he continued, “so confrontational, to tell the truth, I am getting away with murder,” he serenaded with the Papa Roach song I heard playing in the background.

I froze, closing my eyes as heat flooded my veins and fear crept in to my chest.

They’d found me quickly. Where else would I go, after all?

“Riiiiiikaaaaa,” Will sang, toying with me from an intercom in the house out to the garden shed. “I know where you are, Little Monster.”

I could hear the smile in his sickly sweet voice, and my stomach rolled.

Where was Michael? Tears sprang to my eyes, and I held my bottom lip between my teeth to stifle the cry.

“You’re not breathing, are you?” he taunted. “Oh, you’re so sweet when you’re scared. Just as sweet as I remember.”

I let my head fall as I tried to take in air, but I couldn’t stop my chest from damn near convulsing. All I could get were short breaths.

“You think I’ll come back willingly?” I asked.
“You need food,” he pointed out, “and you need a bath.”

I dropped my head back, suddenly gasping for breath.

No. They were going to groom me. Pretty me up to tear me apart.

I shook my head, yelling into the intercom, “Nothing you take from me will come

“I won’t come all the way out there to get you,” he growled.

“You stupid fucking bitch!” he snapped.

“I’ll come to get you,” another voice chimed in on the intercom.

My heart dropped into my stomach, and I let my hand fall away from the intercom.

“And I’ll want my blood back,” he warned.

I backed away from the intercom, holding up my hand and staring at his dried blood coating the insides of my fingers.

Michael, where are you? Only Michael could stop them.

If he wanted to.

Damon’s voice came over the intercom again. “I will take it out of your ass before we leave that shed, Rika,” he threatened. “Don’t run.”

And then the intercom went dead, and I hunched over, knots twisting my stomach.

Michael and Kai were in the house, too, but they weren’t coming for me. Even though I’d seen them do things no better than Damon or Will, they were the only two that could control themselves. That could reign the others back in.

I breathed in and out, sensing that Damon was already on his way.

And Michael and Kai weren’t coming. They were letting this happen.

Standing up straight, I squared my shoulders and let the fear sit. I didn’t push it away or try to bury it.

Damon and Will were going to hurt me.

Kai…I had no idea what Kai was going to do.

I balled my fists, remembering the years of being invisible to him, and then the first time he’d touched my hand.

I was sixteen, nearly three years younger than him, and he’d raised his eyes, meeting mine as he barely held my fingers in his. Years ago, but it seemed like yesterday. I could still feel the heat on my skin.

Those moments of good where he’d looked at me or gave into me were what I’d craved so viciously that I hadn’t seen what was in front of me.

But I did now, and inch by inch, my skin buzzed with anticipation as I turned to open to the shed door.

I would never run. I was built for this.